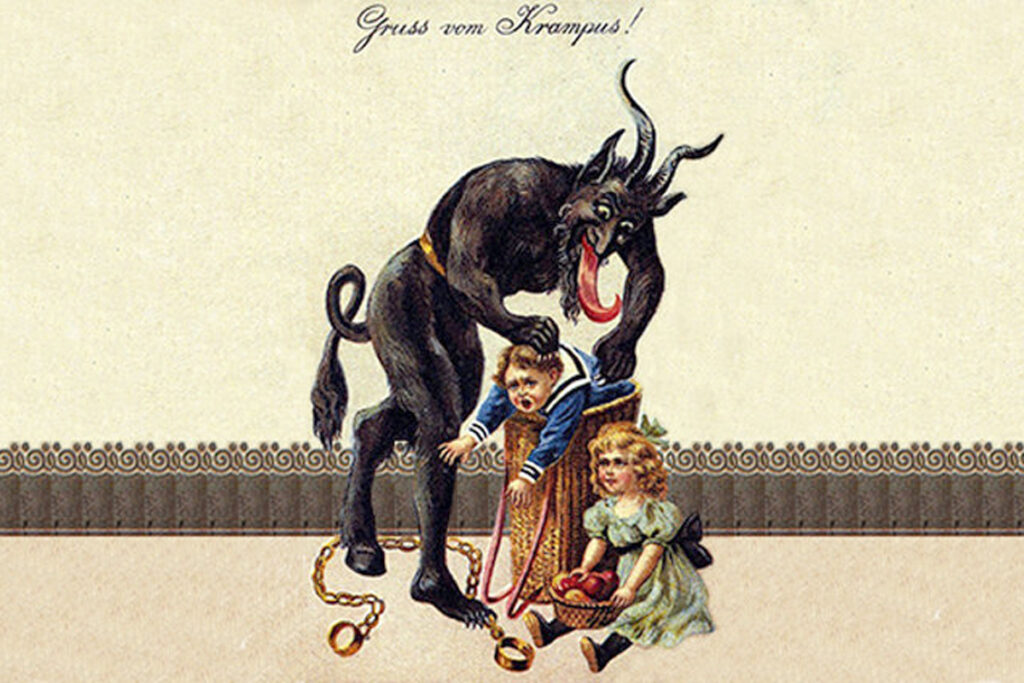 December 5th is the night of Krampus or Krampusnacht in the German.  In some German and Austria regions, Krampus is just as much of the Christmas season tradition as is jolly old St. Nick.  Krampus is the dark flip side to Santa.  He punishes the bad kids and instead of rewarding their good behavior.

Krampus is a evil looking creature that is part goat and part demon.  He is a towering figure with curved horns, a hairy body, and one cloven foot and one human foot. Lets not forget the long red pointed tongue.  He is the thing of nightmares.

Sometimes you can hear Kris Kringle coming with his sleigh bells. You can also hear Krampus coming before he arrives.  Be scared if you hear the mixture of clanking of rusty chains  and cowbells.  “You better watch out. You better not cry…” but not because of Santa.

Krampus shows up to discipline and punish the naughty kids.  He traditionally will carry a ruten bundle or birch rod to whip those that are not behaved.  If a kid is really bad, after the beating, he will chain them, place them in a leather  or woven rush bucket, and take them away on his sled to his hidden layer. The child will never be seen again.

Krampusnacht (or some form of it) has been celebrated in many European cultures for centuries. There are modern celebrations on December 5th in Austria, Germany, Hungary, Slovenia, and the Czech Republic that involve people dressing as Krampus and running around the streets drunk.  Even the United States is getting in on this with large celebrations (probably not this year) in many cities.  Many of the Christmas horror movies are based on Krampus and why not since he is mythological evil.

Telling Christmas season ghost stories used to be be a common practice and tradition for Europe and the United States.  Charles Dickens’ A Christmas Carol is a good old fashioned Christmas ghost story.  Most modern Americans associate Christmas with the most happy time of the year (as the song says) but traditionally it can be a scary fun time also.