March 7 – (1986) Challenger Disaster: Divers from the USS Preserver locate the crew cabin of space shuttle Challenger on the ocean floor.

March 9 – (1987) U2 releases The Joshua Tree, an album that launches them into superstar status in the music world. The album would sell over 14 million copies worldwide in 1987 alone and would win the Grammy for “Album of the Year” (at the 1988 ceremony). U2 have two #1 hit songs from this album on the U.S. Billboard Hot 100 charts.

(1987) The career that would end in an infamous appearance at The Brit awards and the burning of a million pounds cash began in Britain, as The Justified Ancients of Mu Mu (later known as The KLF) release their debut single, “All You Need Is Love”.

March 11 – (1991) Janet Jackson signs a US$30 million contract with Virgin Records, making her the highest paid female recording artist ever.

March 12 – (1989) Sir Tim Berners-Lee submits his proposal to CERN for an information management system, which subsequently develops into the world wide web.

March 13 – (1987) In the US, Bryan Adams’ “Heat of the Night” becomes the first single to be commercially released on cassette. Cassette singles become known as cassingles. 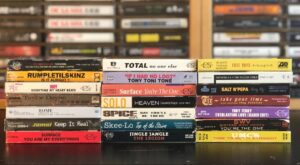 Cassingles were immensely popular – for about 30 seconds.