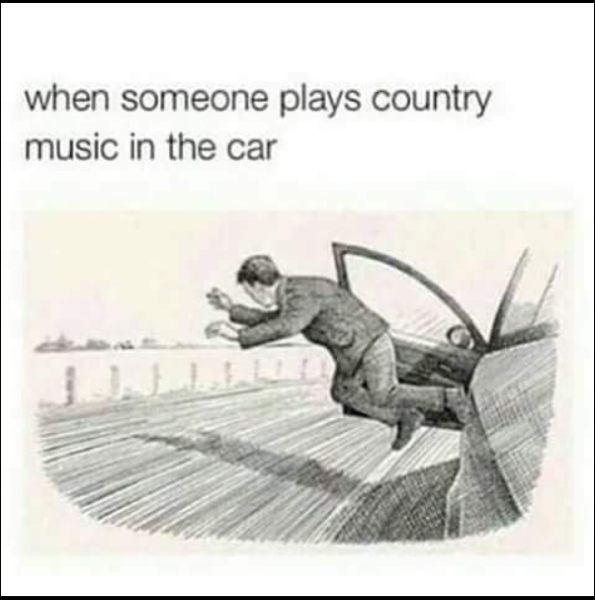 For those that know me even a little, it is apparent that I don’t appreciate Country Music.  I guess that is a huge understatement.  I run from Country Music as quickly as I can in the opposite direction.  It is my Kryptonite.  I have been contemplating the reasons for my disdain for a while and here is what I came up with.

Let me say as a counselor/therapist, music is powerful.  We make associations and memories that tie directly into music.  Maybe it was a specific song that was playing at a certain time that is special or that takes us back to happy memories  or it could even be  a style of music that we associate to life in general.  Our associations and memories are hard wired to the music we love and the music we hate.

Let me take you back to a small town in Missouri.  I was the first born and daughter of manual laborers who also farmed on the side with my Grandpa’s land.  We were an impoverished working family that never had enough money to pay the bills. We rented a house 8 miles outside of a town with less than a 1000 people in it.

My father was a huge Country Music fan.   He hated pop and rock music of the 70s and the 80s.  My mother was more of a fan of the pop music of the 50s and early 60s with Elvis being her favorite.

As a part time farming family, we were all expected to do our part around the farm.  It wasn’t usual to find me on a tracker or running cattle on the weekend.  With my extreme allergies and my distaste for farm work and cows, I hated every minute of it.

Most of my family were redneck hillbillies.  I honestly believed that Jeff Foxworthy knew my family and created all of his jokes from watching my extended family.  The twangy draw of hearing your relatives yell your first and middle name together became more than cringy for me.

There was an expectation that I would grow up and stay around my hometown.  I would learn to love farm work. I wasn’t very good in school so there was an expectation that I would find a nice farmer to marry and pump out kids.  The real hope was for me to become hot in high school and attract a well to do farmer’s son to marry.  I even overheard one of my teachers in elementary school tell my mother that she needed to get the crazy ideas that I would go to college out of my mind and prepare me for the real world of either factory work or farming.

A common denominator with my family and growing up in a small town was Country Music.  Everyone, who wanted to box me in and tell me what I couldn’t do, loved Country Music. It was a part of their life and lifestyle.  It was going to the rodeo or drinking Milwaukee’s Best (The BEAST) at a party in a field. For me, it was the music of my oppression and attempt to box me into a life that I didn’t want.

I was always the rebel at heart and had to do things my way. That is what attracted me to much of the 80s pop, new wave, and rock music.  It was about rebelling and being who you wanted.  Madonna, Joan Jett, Pat Benatar, Blondie, Def Leppard, AC/DC, and Billy Idol were just a few that spoke to me.  They flamed my rebellious nature.  It encouraged me to be true to me and not to what I was being told that I had to be in life.  Billy Idol’s words “With a rebel yell, she wants more, more, more!” became my mantra along with  Joan Jett’s “I don’t give a damn about my bad reputation”.  Watching Madonna be who she wanted to be and not caring became an example for me and part of why I love her so much.

I decided in middle school that I was moving away after graduation and heading to New York City.  New York was about as opposite of a place as I could think of.  There were more people living in a block than in my whole home town.  From what little I knew about New York, it was a place where you could be you and go see bands in local bars that would break out to be the next big new wave or pop or even rock mega stars.

I never fulfilled that dream and moved to New York. I haven’t even visited the city, even though it still burns in me to at least visit the Big Apple.  But I did run as fast as I could away from my home town.  I made it into college and even got my master’s degree in counseling.  My life hasn’t exactly turned out how I dreamed it would be in the 80s but it is far better than the life I could have been stuck with if I would have just bought in to what I was told and become like everyone else (most of the girls in my High School class are back in my hometown and married to farmers).

Country Music has a lot of baggage for me.  It is associated with a lifestyle I hated.  It is linked with the redneck culture of my family.  For me, country music is tied to being boxed into a life that I would have sucked my will to live.  I am pretty sure this is why I react the way I do to Country Music.

As a DJ, I do get an occasional 80s Country Music request. I do my best to find the music and buy it and play it for the VIPs. I know some of your experiences with Country Music vary widely from mine. Some of you have very fond memories of a certain song that brings you back to a special moment in the 80s.  I won’t let my distaste override your want and need to experience that moment again.  But I might just drop some Joan Jett right afterwards to balance it out for me.